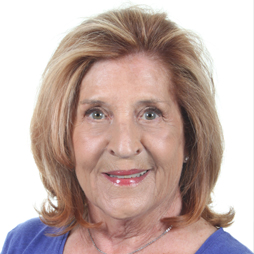 Anne has followed a career path marked with resourcefulness and resilience, combined with a strong streak of independence. Her prime professional activities haveranged from international trade (import-export) to local real estate. In 1990, she launched Executive Relocation Services, responding to the needs of Geneva’s burgeoning multinationals, which quickly grew to a leader in its field, witha staff of 20.

Anne puts this experience to good use in her current role as an independent real estate agent, specializing not only in the sale of residential properties but also in handling broad-ranging, highly-personalized assignments for VIP relocation.

Born in St.Gallen, Anne studied and worked in Paris, Toronto and New York, before settling in Geneva in 1967. Early on, she became involved in local politics and the promotion of women in business and government. This commitment led naturally to the founding of the Career Women’s Forum in 1982 with a group of like-minded colleagues. Anne, who has two daughters and five grandchildren, takes a lively interest in Geneva’s cultural scene and continues to lead an active professional life at 70+.

Anne Deschamps, who are you in 3 words?

What would you do differently if you were 22 again?

Not to get married at 22. At that time I had not defined what life I wanted to lead, both privately and professionally.

What’s your most precious advice to the next generation of women in business?

Get the best education possible, focus on the aims you have set for yourself, remain true to your inner convictions and work on having a good balance between your private and professional aspirations. Do not imitate men, but build on your femine skills and intuition.

Something you are very skilled at

Your perception about networking

Support other women whenever you can and put networking on your priority list.

Belonging to a network of like-minded people, women have a better chance advancing their careers. We can learn from the experience of others. Networking is giving and receiving and therefore, you have to be proactive and give support when you can.

The reward will come later.

What advice would you give someone going into a leadership position – or starting-up a business?

Establish a clear project for the business you want to launch, make sure you can financially sustain it during the first three years and be prepared to work ten to twelve hours a day;
and sometimes on weekends. Only a total commitment will make your business a success. Also, make sure that you have the full and unconditional support of your partner and family.

Being independent requires a solid state of mind to handle in security.

There is no other support than yourself. Creating and running your own business is a great joy and satisfaction!

Which book, hobby or experience would you suggest we should read/try?

RIDING THE WHIRLWIND written by Fons Trompenaars – Connecting people and organization in a culture of innovation.

Is there a message that you would like to convey to the members of the CWF?

What does the Career’s Forum mean to you?

It is a joy to see the development of the CWF today thanks to many committed women who have made it grow and glow. In 1982 the founding members launched the idea of NETWORKING and for me it is one of the greatest satisfactions in my career which had many ups and downs.